Working at QNX comes with a number of benefits, including a nearby forest populated by coyotes, porcupines, white-tailed deer, and a variety of other wildlife.

It was bright and sunny outside last Friday, so I grabbed my camera and headed out into the forest -- just a five-minute drive down the road. An hour later, I returned to the office with about two dozen deer photos, including these two. Enjoy. 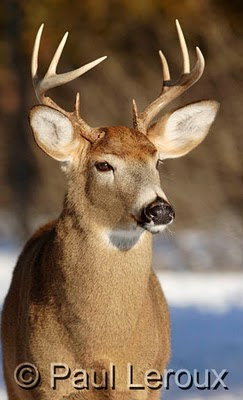 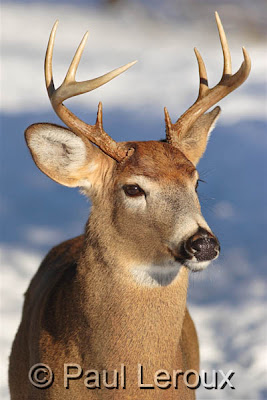 Email ThisBlogThis!Share to TwitterShare to FacebookShare to Pinterest
Labels: Critter of the week, Photography, Wildlife

In December, my colleague Bill Keeler promised that he'd send me a bag of Hershey's kisses if I could make a connection between Hershey's chocolate and the QNX operating system — which I did. Bill, to his credit and my delight, kept up his part of the bargain.

In fact, he went one better and sent me two bags. What a guy! This is indeed a victory to savor. 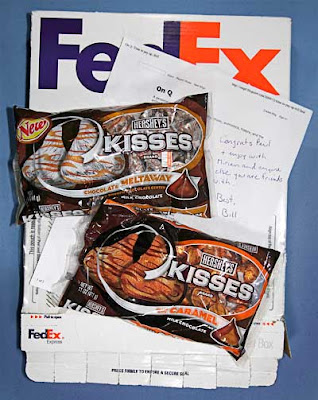 Posted by Paul N. Leroux at 11:35 AM No comments: Links to this post

Last week, I mentioned that some companies and government agencies will match your contributions to Haiti relief. Which means when you give, you give twice.

Fast forward to this morning: I just learned that QNX's parent company, Harman International, has set up a fund to match employee contributions. The company has also made an immediate contribution to the relief effort. Now, I'm not sure whether Harman's management wants me to publicize the company's donation goal, so for now let's just say that it's generous. Which it is.

I hope that this donation-matching plan will create some friendly rivalry among Harman's competitors, including Bose, Boston Acoustics, Pioneer, Continental, Delphi, Visteon, and others. How about it, guys?
Posted by Paul N. Leroux at 10:10 AM No comments: Links to this post

Okay folks, it's time to crack open your wallets. And I don't want to hear any bitching about how the money you give never gets to the people who really need it. Because, believe it or not, there are responsible relief organizations that will spend your money where it's needed most. So do the right thing. The folks in Haiti are relying on you.

And don't forget, a lot of companies and government agencies will match your donation. Which means you end up giving a lot more than what comes out of your wallet.

Check to see if the management at your company have set up a donation-matching program. If they haven't, gently suggest that they do -- and tell them that it's good PR. If they do have a program, broadcast the fact to everyone you know. Because maybe other companies will follow your company's example and do likewise.

Ever wonder what the folks who design flight control systems worry about? I can't say I ever do, but I did gain some insight into their concerns when I stumbled across a recent article from the "Proceedings of the International Multiconference on Computer Science and Information Technology."

The article focuses on choosing a new OS for the avionics system on an ultralight jet aircraft. But here's the twist: The avionics system was already using Linux, which, according to the article, "worked without problems." So why did the system designers want to migrate to another OS?

Because in this system, all device drivers have to be certified and "very safe." The problem with Linux, the authors say, is that device drivers run within the same address space as the OS kernel. As a result, it is difficult to ensure that the drivers won't corrupt the kernel and crash the system. In the immortal words of the avionics columnist Walter Shawlee, "pilots really hate to be told they have to reboot their plane while in flight.”

The system also had to deliver smooth frame rates on the LCD display and, not surprisingly, meet hard deadlines.

Given these requirements, the designers decided to opt for a microkernel OS, specifically the QNX Neutrino RTOS. In a microkernel architecture, each OS subsystem (network stack, file system, etc.) has a private address space similar to conventional user-space applications. To quote the article, this approach offers "complete memory protection, not only for user applications, but also for OS components." It also provides "maximum modularity and relies on robust message passing schema." 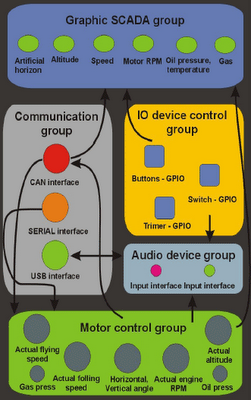 Communication — Uses the CAN protocol and CAN device drivers; each hardware device is a CAN node.

Motor control — Responsible for everything connected with plane control.

For the full story, click here.
Posted by Paul N. Leroux at 2:38 PM No comments: Links to this post

That's not a lens, this is a lens

Hm, I wonder if Canon could make me an image-stabilized version...
Posted by Paul N. Leroux at 10:55 PM No comments: Links to this post

In my previous post, I mentioned that, for the first time, the LTE Connected Car will demonstrate streaming delivery of video games over a 4G LTE network. As it turns out, that isn't the only new feature being introduced this week at the CES Show. Here are two more:

Remote home management — The car will demonstrate how occupants can manage home systems, such as lights and thermostats, from any of the car’s four in-vehicle touchscreens. Occupants can even view a live video feed from home security cameras. This new feature is the result of a joint effort between QNX Software Systems, Alcatel-Lucent, and Intamac, a specialist in home management and security systems.

Celebrity map — Using Celebuzz from BUZZMEDIA, the car will display local celebrity events, photos, news, and gossip, instantly populating a map based on GPS-determined locations. Just the thing for folks who want to catch celebrity events in real time. (Not a feature I would ever use, but given that I watch about two movies a year, I probably lie outside the target demographic...)

For more information on the LTE Connected Car, visit here and here.
Posted by Paul N. Leroux at 5:12 PM Links to this post

This just in: The ng Connect program has announced that, for the first time, the LTE Connected Car will demonstrate streaming delivery of video games over a 4G Long Term Evolution (LTE) network.

The demo will take place this week at the Consumer Electronics Show (CES) in Las Vegas.

According to the ng Connect press release, passengers in the LTE Connected Car will be able to browse a GameStreamer-powered store, purchase a game, and then play it — all from one of the car's infotainment systems.

If you've missed my previous posts on the LTE Connected Car, it is a joint creation of QNX Software Systems and Alcatel-Lucent that showcases how 4G/LTE networks will transform the driving experience and enable a host of new in-vehicle applications. The car contains four infotainment systems, all of which were created with the QNX CAR application platform.
Posted by Paul N. Leroux at 10:46 AM Links to this post

A tale of two terminals

“The last thing we want to see on a self-service terminal is the Blue Screen of Death.”
— Eugene Chan, CTO, AXS InfoComm 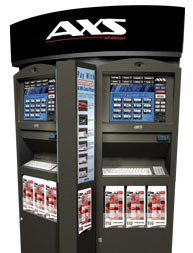 Fast forward to 2009. Another QNX-based transaction terminal — the PAY1 — has become Beijing's only self-service payment kiosk. According to a recent article in AsiaOne Business, the network of PAY1 kiosks “leverages broadband Internet infrastructure to link the kiosks into a secure VPN, and the kiosks are connected both wired and wirelessly.”

So who needs a payment kiosk? It’s not like bills are hard to pay. In most cases, you can simply mail a cheque, pick up a phone, or crank up your PC.

But remember, this is China we’re talking about, where the practice of mailing personal cheques isn’t well-established. If you want to pay a bill you go to the bank, where, according to the article, you stand in line for about 45 minutes. Worse, you must often pay different bills at different locations or banks. Suddenly, a kiosk that lets you pay most of your bills from a single location looks really good.

Both the AXS Station and the PAY1 use the QNX Neutrino RTOS, primarily because “it is very stable and able to handle millions of accounts.” But reliability wasn’t the only criterion. Ease of use is key to the success of self-service kiosks, so both systems also take advantage of QNX’s advanced graphics technologies, which are designed to support a rich user experience without gobbling up scads of memory.
Posted by Paul N. Leroux at 10:59 AM No comments: Links to this post