Next week, QNX will take the wraps off a new "reference vehicle" outfitted with the QNX CAR 2 application platform. It seems, though, that some of my QNX colleagues are off to a head start. A few days ago, they began to leak cryptic images of the new vehicle and threw out a challenge: Can anyone guess the brand name and model?

To add honey to the pot, they're now offering $25 Starbucks gift certificates to the first 25 people who guess correctly. Which adds up to, um, several free lattes.

Oh, almost forgot: I guess it would help if you saw some of the pictures published so far: 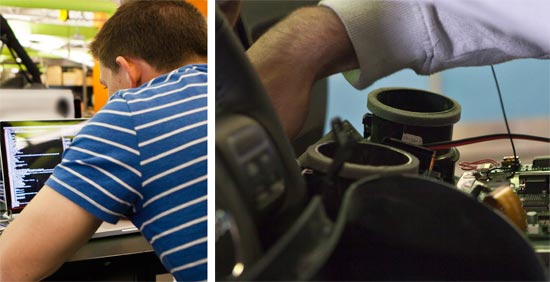 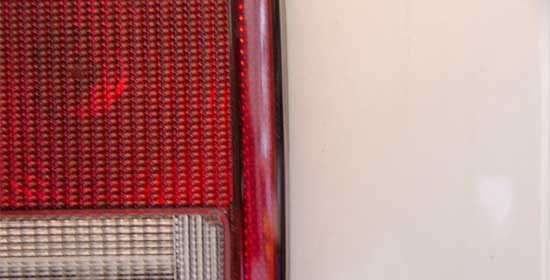 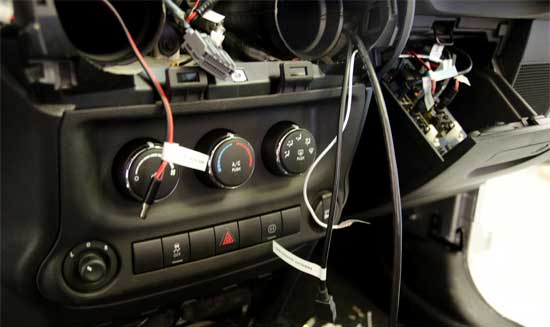 Legal sidebar: Only current residents of the US and Canada are eligible. Also, assume the usual disclaimers that QNX employees and their relatives aren't eligible. And you know what that means... no free lattes for yours truly. :-(

If you live and work in the embedded world, you can't help but notice that M2M has become the industry's new watchword. And if you're like me, you can't help but smile, since embedded devices that either talk with each other or with back-end systems have, in fact, been around for decades. (QNX, for one, was helping developers create peer-to-peer networks of embedded systems as far back as the 1980s.)

Still, the world has changed. The proliferation of mobile networks, along with the ready availability of wireless modules that allow embedded devices to connect to those networks, has created many new opportunities for remote diagnostics, predictive maintenance, location monitoring, and so on.

But don't take it from me, a reigning non-expert on M2M. :-)  Instead, check out tomorrow's M2M webinar, presented by two people who have spent a lot of time thinking about M2M and what it means for next-generation embedded systems: Bob Monkman of QNX and Iain Davidson of Freescale.

Here's an overview the webinar, along with a registration link. Note that you have a choice of two sessions: one at 11:00 am EST, the other at 2:00 pm EST.

Embedded Meets Mobility: M2M Considerations & Concepts
For decades, multitudes of embedded machines have been specialized islands of vertical fixed-function intelligence with unique attributes. As the need and opportunity evolves to connect and coordinate between these embedded machines and the people that need to interact with them, many factors must be considered. Machine to Machine (M2M) offers new efficiencies in operational management of networked devices, the addition of new services and new business models for stakeholders within the value chain. Freescale and QNX will present an overview of revenue opportunities for M2M and the essentials of developing secure, reliable and scalable M2M networks, managed device endpoints, coupled with management concepts for devices in cloud computing.

Posted by Paul N. Leroux at 3:01 PM No comments: Links to this post

What has the QNX auto team been up to?

Posted by Paul N. Leroux at 5:38 PM No comments: Links to this post

Email ThisBlogThis!Share to TwitterShare to FacebookShare to Pinterest
Labels: Automotive

This just in: Systems Engineering Consultants (SEC), a leading realtime technology company in Japan, has developed new robotics middleware that runs on the QNX Neutrino RTOS Safe Kernel. Like the Safe Kernel, SEC’s middleware is certified to the IEC 61508 standard at Safety Integrity Level 3, or SIL3. (If you’re new to IEC 61508, this certification provides independent validation that a product offers a very high level of reliability when used in safety-critical systems.)

According to Shintaro Sakurai, an executive director in the engineering division of SEC, “SEC has been working with industry groups and robotics societies to promote component standardization, which we believe will eliminate cost issues that have prevented commercialization of robotics. After much R&D effort, we are getting ready to move into the business phase to offer our customers an IEC 61508 certified middleware platform to run on the QNX Neutrino RTOS Safe Kernel.”

Posted by Paul N. Leroux at 12:29 PM No comments: Links to this post

I'm lucky. Every day, I get to work with extremely smart and articulate people. And two of the smartest are my colleagues Chris Hobbs and Yi Zheng. It seems that, every time I talk to either of them, I learn something new. Good, that.

This Thursday, Chris and Yi will deliver a webinar on using formal methods to develop safety-critical software. Specifically, they will discuss the experience of using Rodin, a European formal design tool, to design software for a simple medical device. They plan to cover what worked, what didn’t, how much work was involved, and most intriguingly, what surprises were uncovered.

Formal methods, which use mathematically based techniques to specify, develop, and verify software, have often failed to meet expectations when applied to the development of commercial products. But that is starting to change, thanks to a new generation of tools. The potential benefits of these tools are many, including reduced implementation and test times, not to mention the ability to “prove” that your design is correct — something that can come in handy during the device approval process.

POSTSCRIPT: If you didn't catch the live version of the webinar, no worries. You can always download the archived version, which should appear about 48 hours after the live broadcast. Same link as above.

Posted by Paul N. Leroux at 5:29 PM No comments: Links to this post

Every year, the world's top automakers and automotive suppliers vie for a chance to win a Telematics Update award. In 2011, for example, Audi, BMW, Hyundai, OnStar, and Toyota took top honors in categories such as best infotainment solution, best safety technology, and best cloud-based application.

The categories were varied, but these winners share one thing in common: they all use the QNX platform.

As with 2011, so for 2012. If you look at this year's shortlist, you'll see that several QNX customers and technology partners are again in the running. The finalists include GM, whose MyLink system is up for best global infotainment solution, and OnStar, whose FMV system is up for best aftermarket solution.

This pattern is nothing new. Back in 2009, for example, more than 50% of the Telematics Update award winners either worked with QNX as a technology partner or used the QNX platform in their in-car systems.

And did I mention? QNX itself is up for a Telematics Update award this year! The QNX CAR 2 application platform, which drove home with a Best of CES Award in January, is a finalist in the industry newcomer category.

Two of the QNX-powered systems shortlisted for this year's Telematics Update awards:
GM MyLink and OnStar FMV
It's hard to know what pleases me more: that QNX has been singled out for an award, or that QNX has once again helped its customers make the shortlist. Either way, I'm stoked.

The winners will be unveiled June 5, just prior to the Telematics Detroit show. In the meantime, my congratulations to all the finalists.

This post also appeared on the QNX auto blog.

Posted by Paul N. Leroux at 4:12 PM No comments: Links to this post

Building a medical device that meets strict regulatory requirements is a long and sometimes painful process. To help ease the pain (and more importantly, speed up pre-market qualification activities), QNX has released the new QNX Neutrino RTOS for medical devices, which complies with the IEC 62304 standard for medical device software life cycle processes.

If you develop software for medical devices, check out the product overview for the new OS. Then head over to the whitepaper section of the QNX website. You'll find several papers of interest, including:

Posted by Paul N. Leroux at 10:57 PM No comments: Links to this post

If you aren't at BlackBerry World this week, you're missing out. For starters, you won't get to see what, in my biased opinion, is the world's coolest car: the QNX-powered and very connected Porsche 911.

But not all is lost. You can still watch this video from Sydney Myers of PhoneDog.com, who caught with up with Mike Shane of QNX for a tour of the car's features — from instant smartphone pairing and off-board navigation to handsfree calling with HD stereo. Check it out:

My favorite part? When the text overlay on the video shouts out "The audio quality was REALLY good." Got that right.

And did I mention? Mike is one of the super-talented people who built the concept car. He's a keeper.

This post also appeared on the QNX auto blog.

Posted by Paul N. Leroux at 6:50 PM No comments: Links to this post

In case you didn't catch the live broadcast of the BlackBerry World keynote this morning, here's a tiny bit of what you missed. It's a quick video showing some of the cool features coming to the BlackBerry 10 platform. Check it out:

In case you're wondering, the phone in the video is a prototype device designed to help developers create apps for BlackBerry 10; it's not a commercial product. To learn more about the device, click here.

Posted by Paul N. Leroux at 10:58 AM No comments: Links to this post

This just in: Research In Motion (RIM) and QNX Software Systems have announced a new initiative to encourage university students in China to develop more apps and services for the BlackBerry® platform. The initiative aims to nurture the spirit of innovation among young Chinese developers and to help them gain know-how in taking an idea from concept to market.

As part of the initiative, RIM and QNX will provide BlackBerry devices, software development tools, and technical support. They will also launch a competition to provide student developers with further incentive to turn their creative ideas into apps and services. To read the full press release, click here.

Posted by Paul N. Leroux at 10:09 AM No comments: Links to this post