Video: Enabling the next generation of cool

I've said it before and I'll say it again: I like being on the QNX team because we help people do really important stuff — and really cool stuff. Here's a short video that captures a bit of both:

Posted by Paul N. Leroux at 1:28 PM No comments: Links to this post

Who will clean up at this year's International Telematics Awards?

Every year, the worlds' top automakers and automotive suppliers vie for a chance to take home an International Telematics Award. Last year, for example, the Audi 3G MMI system won in the navigation product category, and the BMW ConnectedDrive system won in the telematics service category. Meanwhile, the QNX CAR Application Platform took top honors in the telematics component category.

See a pattern here? That's right, all three are based on the QNX operating system.

As with 2010, so for 2011. QNX has again been shortlisted, this time in the infotainment solution category. Meanwhile, several QNX customers — including Audi, BMW, GM, Harman/Becker, and Hyundai — have also clinched finalist spots. (To see the complete list, click here.)

As a long-time QNXer, I don't know what pleases me more:  that QNX has been singled out for an award, or that QNX has again helped multiple customers make the shortlist.

Either way, I don't envy the competition judges: They have to choose between some very cool systems.

Posted by Paul N. Leroux at 4:37 PM No comments: Links to this post

So why does all the cool stuff happen when I'm on vacation? Last Friday, while I was driving to the cottage, Elektrobit announced that QNX Software Systems has been chosen to provide the operating system and multimedia engine for MIB High, the next-generation infotainment platform for Audi vehicles.

Let's rewind for a minute. To stay relevant, automakers must create cars that integrate with the multitude of smartphones, tablets, and mobile services that have become standard equipment for day-to-day life. In fact, many consumers won't even look at a new car unless it provides such integration. Problem is, the traditional development cycles for building in-car electronic systems lag far behind those for the mobile market — years compared to months.

That's why I find the MIB High so fascinating. On the hardware level, it consists of two main modules: the Radio&Car Control Unit (RCC) and the multimedia unit (MMX). The RCC implements features that remain stable over time, such as interfaces to the automotive CAN bus. The MMX, on the other hand, implements features subject to change, such as navigation, connectivity, and multimedia. By leveraging this modular approach, the system's developers can "carry out partial re-development to react more quickly to customer requirements and changing consumer electronics, getting them into vehicles on a shorter cycle."

It's an innovative approach. More importantly, it can help the connected car stay connected. Good, that.

For more information, read the Elektrobit press release. Among other things, the release contains details on the new business model created by Audi, Elektrobit, and e.solutions, the developer of MIB High. 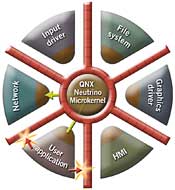 This just in: QNX has announced an update to its QNX Neutrino RTOS Secure Kernel. The new version supports a greater variety of single-core and multi-core processors and boasts faster kernel performance in periods of heavy memory utilization. It also allows developers to take advantage of Persistent Publish/Subscribe (PPS) messaging, which I've discussed in previous posts (see here, here, and here).

Like its predecessor, the new version:
Who is this product for? Primarily companies that build power plants, defense systems, subway control centers, government networks, and other mission-critical applications.

To find out more about the secure kernel, click here.

Posted by Paul N. Leroux at 12:57 PM No comments: Links to this post

A couple of years ago, I regaled you with the story of MABEL, a robot designed to study bipedal locomotion. Among other things, MABEL aims to achieve a better compromise in "speed, stability, agility, and energy efficiency" than other bipedal-robot designs. (I'm quoting Jessie Grizzle, a professor of electrical engineering at the University of Michigan and one of the masterminds of the MABEL project.)

To acquire data from sensors, compute control actions, and output commands to actuators, MABEL uses a realtime computing and data acquisition environment based on the QNX Neutrino RTOS. The software framework for the control system is based on RHexLib, which was originally developed for RHex, another QNX-based robot.

If you're in the mood for a deep dive on MABEL, check out the April 2011 edition of IEEE Control Systems magazine — the article runs an impressive 25 pages. If, however, you'd like something a little lighter, I suggest the three following videos:

MABEL walking on an uneven surface


MABEL walking like a human, with "heel-strike and toe-off"


MABEL, before and after correction of a hardware bug

Posted by Paul N. Leroux at 9:11 PM No comments: Links to this post

The Space Shuttle Endeavour embarked on its 25th and final voyage at 12:56 GMT this morning, with six crew members on board. As with all shuttle flights, the Endaevour is equipped with the QNX-powered LCS camera, a high-precision 3D scanner that can detect the tiniest fractures in the shuttle's heat shield, even if they're only a few millimeters in size.

I've got a couple of videos for your viewing pleasure. The first provides an overview of QNX's role in the LCS. The second provides footage of this morning's launch:

For more information on QNX and the LCS, check out the article I co-wrote with Neptec's Iain Christie.

Posted by Paul N. Leroux at 9:55 AM No comments: Links to this post

RIM CTO: How RIM is steering BlackBerry toward QNX

Yesterday, ZDNet UK interviewed David Yach, RIM's software CTO, about "tablets, smartphones, and key mobile issues." I was particularly interested in David's comments on the QNX OS. Among other things, he offers an example of QNX's support for fine-grained fault isolation and recovery — the same capability that makes QNX technology popular in Internet routers and other high-availability systems. To read the interview, click here.

Posted by Paul N. Leroux at 9:22 PM No comments: Links to this post

Choosing the right OS for your medical device

All this means one thing: When designing and developing a medical device, you have to get it right the first time. The cost of a false start is simply too onerous. Medical device manufacturers get this, which is why many choose their OS in the early phases of any new project. They understand that, as the software foundation for the device, the OS can make it a lot easier (or a lot harder) to implement complex features, achieve high reliability, and address regulatory requirements.

The question is, how do you choose the most appropriate OS? Choices abound: Android, QNX Neutrino, Linux, Windows CE — and let's not forget roll-your-own. All offer a unique feature set and all have their advocates.

Recently, Medical Electronics Design published an article to address this issue. The article, titled “Choosing the right OS for your medical device,” was authored by my estimable colleague Justin Moon. To read it, click here.

Posted by Paul N. Leroux at 8:57 PM No comments: Links to this post

A few days ago, I told you that the Solar Impulse, a solar-powered airplane that takes advantage of the QNX Neutrino RTOS, was ready to take its first international flight. Well, the Solar Impulse team must be breaking out the champagne, because the flight was a success.

Check out this short clip from AFP:

Posted by Paul N. Leroux at 10:33 PM No comments: Links to this post

A little over a year ago, I published two long yet popular posts (here and here) on persistent publish/subscribe messaging, aka PPS. The posts explored why PPS offers several advantages over other forms of IPC and why it makes automotive instrument clusters, smart energy panels, and other devices easier to develop, maintain, and upgrade.

In a nutshell, PPS lets you create loosely coupled designs based on asynchronous publications and notifications. This “decoupling” offers a great deal of flexibility, allowing you to delay final decisions on module connection points and data flow until runtime. Because such decisions don’t have to be hardcoded, they can be adapted as requirements evolve; they can even change dynamically as the system runs.

Just one thing: My posts failed to discuss how PPS could be applied to medical devices — a glaring omission! Fortunately, my QNX colleagues Justin Moon and Ben VandenBelt have filled the gap. To check out their new paper on PPS in medical devices, click here.

Posted by Paul N. Leroux at 4:55 PM No comments: Links to this post

Angus Young meets the BlackBerry PlayBook (yes, you should crank up the volume)

QNX. AC/DC. One is an OS, the other is a rock band. No connection, right?

Before you answer that, check out this video from Telus…

The folks over at the BlackBerry Blog have been busy beavers, posting freshly minted videos from BlackBerry World 2011. I was particularly interested in the demos of the Android App Player, native email app, SAP sales dashboards, Facebook app, and a BlackBerry "super app".

Grab some popcorn, dim the lights, and check them out:

Posted by Paul N. Leroux at 11:28 AM No comments: Links to this post

It has the wingspan of a Boeing 777, but weighs only as much as a family car. It has four propellers, but doesn’t consume an ounce of fuel. It is, to say the least, unique in the aviation world. And if you’re in Paris this June, you’ll have the unique opportunity to see it take to the skies.

I’m talking about the Solar Impulse HB-SIA, the first plane designed to fly round the clock using solar power. Equipped with four electric motors powered by 12000 solar cells, the HB-SIA has already made several flights, but always within Swiss borders. That’s about to change.

Recently, the HB-SIA received clearance to make its first European flight. The first stop is Brussels, where the plane will be on display from May 23 to 29. From there, the HB-SIA will fly to Paris, where it will make a guest appearance at the International Paris Air Show, from June 20 to 26. Weather permitting, the HB-SIA will fly over the air show every morning, allowing visitors to see a plane powered only by the sun.

As mentioned in previous posts (see here and here), QNX is the realtime operating system provider for the Solar Impulse project. I hope to provide more details in coming posts.

Here's an Associated Press video documenting the completion of the HB-SIA's first 24-hour flight (you may have to wait out a 10-second commercial):

By the way, the Solar Impulse team doesn't have suffer from any delusions that solar-powered planes will someday replace conventional aircraft. Their main goal is promote greater use of renewable energy. To quote Bertrand Piccard, the plane's creator, "Solar Impulse is being developed primarily to change the energy consumption philosophy. We want [everyone] to understand that the renewable energy sources can be used quite effectively."

Check out these two BlackBerry PlayBook videos recently produced by Adobe TV. The first video focuses on the PlayBook's suppport for HD video, multitasking, mobile apps, and digital publications. The second focuses on the new Flash-based Facebook app. Speaking of which, the app is now available for download from BlackBerry App World.


Posted by Paul N. Leroux at 5:57 PM No comments: Links to this post