Don't know about you, but I find "Digital Drive Car of the Year" a little hard to parse, grammatically speaking. After all, have you ever owned a digital drive car? I didn't think so.

That said, it's an interesting award. The folks who created it -- the bloggers at TECHNORIDE -- start from the premise that technology, not performance or upholstery, is the key differentiator in today's auto market. No arguments there. Also, they seem to prefer models that deliver the best technology bang for the buck, as well as the best driving experience. Good, that.

Top honors this year went to the Acura TL, which uses the QNX-based HandsFreeLink system. True to its name, this system allows drivers to make handsfree calls, using Bluetooth and voice recognition technology. Bluetooth, by the way, was a key prerequisite for winning the award.

The 10 runners-up included models from BMW, Infiniti, Mercedes, Nissan, Porsche, Volkswagen, and Audi. I'm pretty sure QNX is in some of these models. Will do some digging and let you know.

For the full skinny on the Digital Drive Car awards, check out the TECHNORIDE blog.
Posted by Paul N. Leroux at 4:25 PM No comments: 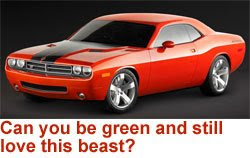 I drive a hybrid. No, not a gas/electric car, but a hybrid bicycle, which combines some of the speed of a road bike and with some of the ruggedness of a mountain bike. A nice compromise if you travel on both paved and unpaved roads.

My choice of ride comes down to a pretty simple philosophy: When possible, choose a vehicle that weighs less than you, rather than one that weighs 40 times more than you. If that makes me a tree hugger, then so be it.

Still, I grew up in the 60s, an era of gorgeously overpowered muscle cars. Back then, I was flat out in love with anything that had a V8. I spent endless hours reading about cars, drawing pictures of cars, building models of cars, and talking about cars. Juan Fangio was my hero; driving a 400 horsepower GTO, my ultimate fantasy.

Eventually, though, I grew up and discovered girls, guitars, and, somewhere along the way, a concern for the environment. The fantasy of cruising in a gas-guzzler lost its luster.

So do I welcome the next generation of electric cars? Definitely, though they're sure to hit a few speed bumps along the way. According to Lux Research president Matthew Nordan, 42% of the world’s lithium carbonate will be consumed if only 6.4% of the world’s cars use lithium ion batteries. A oddly framed statistic, but one that gives you pause nonetheless.

But, you know, even if electric cars fulfill their environmental promise, I really hope that governments avoid the temptation to regulate gas-powered muscle cars and supercars out of existence. I know this sounds irrational, given my distaste for burning gasoline. But, let's face it, there's nothing rationale about the relationship between humans and cars. Cars aren't simply a form of transportation; they also serve as a vehicle for expressing who are are and what we want people to think of us.

So, as much as I prefer to bike when possible, I still love beautiful, wickedly fast cars. I may not buy a Dodge Challenger for myself, but if my neighbor buys one and offers to take me out for a spin, you can bet I won't turn him down.

Maybe I'm not green enough. Or maybe I simply prefer to live in a world where humans have some latitude to indulge themselves. A world where the lion of fantasy can lie down with the lamb of practicality. A world that still has cool stuff.
Posted by Paul N. Leroux at 4:00 AM 4 comments:

Thinking outside the box

Not just a pretty (inter)face

Hey, do you remember Open Look? It was the GUI specification used by QNX Windows, a windowing system for versions 2 to 4 of the QNX RTOS. Open Look had a clean, simple appearance based on the philosophy that the application, not the windowing system, should hold the user’s attention. Gaudy, it wasn’t.

QNX Windows appeared on the scene in 1990, back when most desktop PCs still used DOS. Amazingly, it could run on 16-bit 286 machines with 2MB of RAM — and, remember, we're talking about a true windowing system here, not a simple graphics library. Developers used QNX Windows for a variety of mission-critical applications, including mail-sorting machines for the US Postal Service and a statistical process control system for a Motorola semiconductor fab. 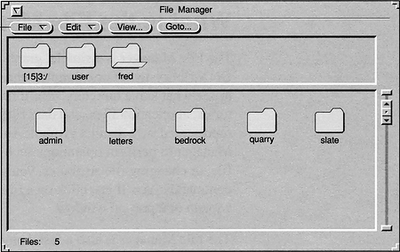 The QNX Windows file manager, circa 1990.

So why am I mentioning all this? Because, while other RTOS vendors offer programming interfaces, they provide little in the way of user interfaces — unless you count the command-line prompt. QNX, in comparison, has been at the forefront of embedded HMIs for as long as I can remember.

Witness the QNX Photon microGUI, the first windowing system based on a microkernel architecture. And the QNX graphics framework, which allows embedded developers to build user interfaces with Adobe Flash Lite and the OpenGL ES 3D API. (The QNX digital instrument cluster is a good example of an application that combines uses both Flash and OpenGL ES in the same display.) I find Flash support especially interesting, since it saves developers from having to code, and often recode, their GUI components by hand.

In fact, QNX has even begun to reach beyond graphical interfaces with its acoustic processing technology, which helps handsfree and voice recognition systems work more effectively.

Because, sometimes, a word is worth a thousand icons. Well, something like that. :-)
Posted by Paul N. Leroux at 12:37 PM No comments: