Quick: How big is a fox terrier? If you’re like most people, you probably have no idea. Yet, for almost a century, science textbooks stated that Hyracotherium, an extinct relative of the horse, was the size of one.

Why would textbooks keep repeating this comparison, when nine out of ten people wouldn’t know a fox terrier if it bit them? For that matter, why would a science book even use such a comparison, when inches or centimeters would be more, well, scientific?

The explanation is simple: The people who wrote the textbooks didn’t know how big Hyracotherium really was. They simply regurgitated what they had read in previous textbooks. Worse, the comparison is inherently flawed, since some research (MacFadden, 1986) suggests that Hyracotherium weighed in at 55 pounds — almost three times the weight of a healthy fox terrier.

Stephen Jay Gould revealed this sorry tale of science education in his 1988 article, “The Case of the Creeping Fox Terrier Clone.” It’s a classic story of how a handy phrase can encourage flabby thinking and obscure the truth. Incredibly, a number of sources continue to clone the erroneous comparison. One source makes a vain attempt to evade the issue by replacing "fox terrier" with "terrier" — a term that refers to a large variety of breeds ranging from 5 to 100 pounds.

Which brings me to a new phrase that has been cloning itself in the blogosphere: “The multi-core crisis.” If you look here, you’ll find several recent blog posts that warn of this impending catastrophe.

But here’s the thing. Most of these posts provide a balanced perspective on the multi-core issue. They don’t claim that the sky is falling. Rather, they say that system performance is going to hit a plateau unless software developers start designing more parallelism into their applications.

Why, then, do they call it a crisis? Alexander Wolfe nailed it when he said that bloggers are using the phrase because it “makes the problem much more accessible.” Nothing like a bit of drama to spark interest.

Nonetheless, the phrase obscures the truth. QNX, for example, has customers in the networking, industrial, and medical markets who have already made a successful transition to multi-core, and they did it without having to totally rethink or rewrite their software. The transition to multi-core on the desktop has been equally lacking in catastrophe. Case in point: I just read a review of an 8-core Apple Mac Pro in which three video-production applications took advantage of the system’s 8 cores, right out of the box.

Are there challenges in moving to multi-core? Of course. Will some software developers find the transition harder than others? No doubt. But is there a true crisis looming? Only if we keep calling it that.

Email ThisBlogThis!Share to TwitterShare to FacebookShare to Pinterest
Labels: Multi-core

Anything good on your geek shelf? 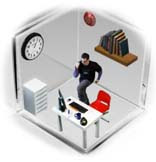 I’ve been enjoying QNX’s new Pocket Geek game and have come to a few conclusions about the diminutive coder:

Now that brings up an interesting point. At no time in the game does the Pocket Geek ever consult the massive tomes looming over his head. So why does he keep them?

If you’re a techie, you probably have a few reference books on your shelf. Are they all gathering dust, like the ones in the Pocket Geek game? Or has one made a real difference to your skills and productivity as a software developer?

Think of it this way: If the Pocket Geek were to read one book that would raise his productivity to new heights, what would it be? The 7 Habits of Highly Effective People? Extreme Programming Pocket Guide? The Joy of C?
Posted by Paul N. Leroux at 5:18 PM No comments: Links to this post

For as long as I can remember, the QNX corporate color has been blue — RGB 0,51,102, to be exact. Lately, however, things at QNX have been looking a bit greener.

No, Spring isn’t coming early to Ottawa. Rather, QNX has been working hard to shrink its environmental footprint.

We started with small things, like getting rid of coffee stir sticks and styrofoam cups. Next, we placed more recycling bins at strategic locations throughout QNX headquarters. Then, we replaced older fluorescent lighting with ballasts and bulbs that consume significantly less energy. We’ve even installed motion sensors in meeting rooms and washrooms so that lights turn themselves off when not in use.

We’re discovering that, over time, even small changes can reap big benefits. Case in point: Raising the office temperature slightly during summer and lowering it slightly during winter not only reduces energy consumption, but also cuts down on our electricity bills.

We’re also looking more closely at the goods we consume. For instance, we realized that the paper for our photocopiers and fax machines contained no recycled fibers. So we switched to paper that does.

Mind you, initiatives like this work only if everyone gets involved. So the folks in charge of our environmental efforts have been encouraging employee feedback and implementing it where feasible. As for myself, I took a cue from other QNX employees and started biking to work — though admittedly, I’ve had to stop temporarily as a result of record snowfalls in Ottawa. (Sometimes, even nature can get in the way of a green initiative!)

What about you? What measures have you or your company implemented to pollute less and recycle more? Are there any difficult challenges you had to surmount? Any techniques or ideas you’d like to share?
Posted by Paul N. Leroux at 3:05 PM 1 comment: Links to this post

Email ThisBlogThis!Share to TwitterShare to FacebookShare to Pinterest
Labels: Recycling

QNX gets a jolt

Good news: Dr. Dobb's magazine has just announced that the QNX Momentics IDE is a finalist in the 18th annual Jolt awards. Momentics is up against five other IDEs in the Development Environments category, including Sun's Netbeans IDE 6 and ActiveState's Komodo IDE 4.

Taking home this award would be a real coup, as the Jolt judges actually download and try out the shortlisted products. In many other technology competitions, judges simply review written submissions and make their decisions based on what they've read.

But hey, why wait to hear what the Jolt judges say? If you've never used QNX Momentics, download it now and judge for yourself. Visit http://www.qnx.com/products/getmomentics/. 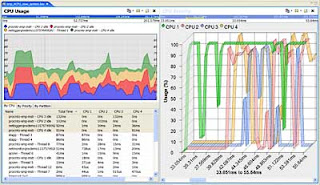 Tags: QNX
Posted by Paul N. Leroux at 12:10 PM No comments: Links to this post

Back in 2005, a press release described 25 ways in which people encounter QNX technology every day, whether they’re watching TV, washing their car, or surfing the web.

Allow me to add item 26: Taking your medicine.

This week, VisionSystems Design published a story on a new QNX-based vision system that can inspect up to 500 pharmaceutical blister packs a second. Developed by Scanware Electronic of Germany, the system uses algorithms written in C and C++ to detect contamination, broken pills, and empty or overfilled packets.

It turns out that the QNX Neutrino RTOS has a long history in vision and imaging systems. You'll find it in everything from the space vision system that helps Shuttle astronauts position the Canadarm to inspection systems that scan for defects in the lids of peanut butter jars.

Speaking of which, allow me to add item 27 to the list: making a PBJ! 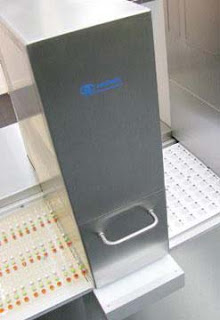