This just in: QNX Software Systems has entered into a distribution agreement with Arrow Electronics, a global provider of products, services, and solutions for the industrial automation and commercial markets.

Under the agreement, the companies will focus initially on the distribution of QNX technology and engineering services to the medical, industrial automation, and general embedded markets in North America.

You can read the press release here.

(Yet) another video of the QNX concept car

I've already shared some videos of the new QNX concept car, which made its debut last week at 2012 CES. Here's another video of the car, from the Inside BlackBerry team, that is worth a watch.

Among other things, the video shows how the car can quickly pair with a Bluetooth phone, via NFC. It also shows how the head unit can seamlessly control the backseat tablets. Check it out:

QNX drives home with a Best of CES award

This is old news if you already saw my post on the QNX auto blog. But in case you haven't heard, QNX Software Systems has won a Best of CES Award, in the Car Tech category, for its recently announced QNX CAR 2 application platform.

QNX received the award yesterday, at an awards ceremony in Las Vegas.

For a glimpse of why the folks at CES think so highly of QNX CAR 2 (and of the QNX concept car designed to showcase CAR 2's capabilities), check out this video from CNET's Antuan Goodwin and the photos I posted earlier this week.

Posted by Paul N. Leroux at 1:02 PM No comments: Links to this post

New QNX concept car is "on the verge"

Yesterday, I treated you to an excellent video of the QNX concept car, taken by CNET reporter Antuan Goodwin. Well sit back down, because I've got another video that runs through even more of the car's features.

Posted by Paul N. Leroux at 10:54 AM No comments: Links to this post

This just in: Antuan Goodwin of CNET has posted a video walkthrough of the new QNX concept car, which showcases the many capabilities of the QNX CAR 2 application platform.

Posted by Paul N. Leroux at 5:45 PM No comments: Links to this post

This just in: The new QNX concept car, which showcases the many capabilities of the QNX CAR 2 application platform, has been selected as a finalist for a Best of CES 2012 award. WOO-HOO!!! (Sorry, I just had to get that out of my system.)

Other finalists include über-cool cameras from Nikon and Canon, as well as state-of-the-art TVs from LG, Panasonic, and Samsung. Dell, HP, Pioneer, and Sony are also in the running.

CNET members vote for who will take home the award. CNET will announce the winners tomorrow at 11 am Pacific Time — stay tuned!

For more photos of the car, check out my post on the On Q blog. And while you're at it, check out the CNET article by Antuan Goodwin.

This post originally appeared on the QNX auto blog.

Posted by Paul N. Leroux at 3:04 PM No comments: Links to this post

This morning at CES, CrackBerry.com met up with QNX's Andrew Poliak for a walkthrough of the new OnStar RemoteLink app for the BlackBerry PlayBook.

If you aren't familiar with RemoteLink, it provides a very cool and powerful connection to OnStar-equipped vehicles. From the convenience of your tablet or phone, you can access gas mileage, tire pressure, and other information in real time; you can even remotely start your vehicle and unlock its doors.

Cooler yet, the new version running on the PlayBook boasts a user interface built entirely in HTML5. But enough blather from me. Roll the tape...

Did you know? QNX is the core OS for the PlayBook, but it's also the OS for OnStar and OnStar FMW.

This post originally appeared on the QNX auto blog.

Posted by Paul N. Leroux at 1:07 PM No comments: Links to this post

I may be biased, but I'm really looking forward to OS 2.0. It not only includes native email, but also lets you juggle multiple emails, and multiple email accounts, simultaneously. Mind you, there's a lot more to OS 2.0 than cool new email features. To get a taste of what's in store, check out this walkthrough with Jeff Gadway of RIM:

This video doesn't touch on everything that's new in OS 2. For additional features, check out the RIM press release, which provides a good overview.

Posted by Paul N. Leroux at 2:30 PM No comments: Links to this post

A few minutes ago, QNX announced a new concept car, which it will showcase this week at the 2012 Consumer Electronics Show. Mind you, this isn't the company's first concept car. It has already created a couple of them, including a specially modified Chevrolet Corvette. If you ask me, the QNX concept team did a pretty cool job with the Vette. But this time, they went cooler.

The new car, based on a Porsche Carrera, comes equipped with an array of features, including one-touch smartphone pairing, tablet-based rear-seat entertainment, high-definition hands-free calls, and a reconfigurable digital instrument cluster. But hey, you can read all that in the press release! So instead, let's take a virtual tour of the car, using some of the first available photos...

The door
To get started, hop into the driver's seat — but before you do, note the QNX logo deftly emblazoned on the driver-side door: 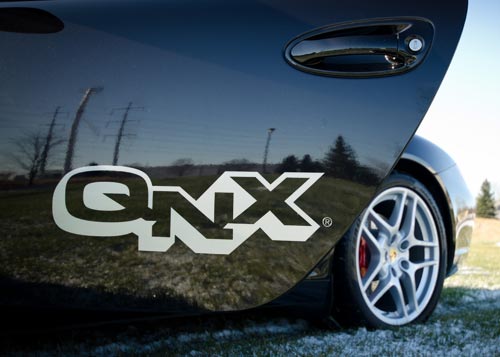 The cluster
Once you get behind the wheel, the first thing you'll see is the digital instrument cluster:

It's too bad I don't (yet) have a video of the cluster. Because if I did, you'd see how it can dynamically reconfigure itself — in response to voice commands, no less. It even communicates with the navigation system to display turn-by-turn directions. Cool, that.

The head unit
Now look to your right, and you'll see the head unit. Here is the unit's main screen, from which you can access all of the system's key functions: 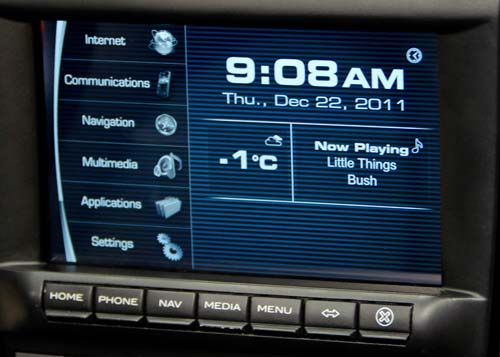 And here's another screen, showing the system's media player: 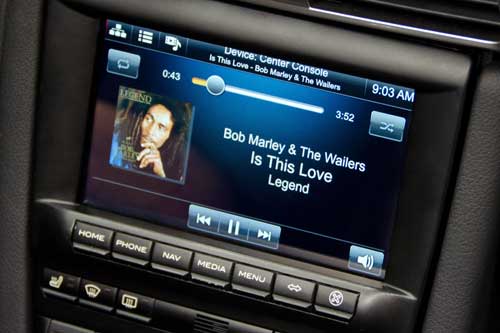 The tablet integration
Now, I know you're just getting comfortable, but let's step out and take a bird's-eye view of the car. As you can see, it comes equipped with two BlackBerry PlayBook tablets to demonstrate backseat entertainment. But what you can't see is the very cool integration between the tablets and the head unit. For instance, the head unit provides front-seat control of the backseat entertainment — great for when you want to control what your kids are watching or listening to. Better yet, any device can play videos and music stored on any other device. The head unit, for example, could play what's stored on the right tablet, or vice versa. And it all happens seamlessly.

The cool stuff you can't see
A picture may be worth a thousand words, but these photos don't capture everything. For instance, the car also features:

Conversational voice recognition — Lets you enter navigation destinations naturally, without having to use artificially constrained grammars

The point
The point of the concept car isn't just to be cool, but to show automakers (and everyone else, for that matter) what's possible in next-gen car infotainment systems. More to the point, the car is designed to showcase the new QNX CAR 2 application platform, which introduces a new HTML5 framework to help automakers "keep their vehicles fresh with new content and features, address consumer demands for the latest mobile apps and services, and leverage a huge developer community." I'm quoting from the QNX CAR 2 press release, which also hit the newswire today. You can read it here.

The rest of the week
I expect the car will garner a fair amount of media coverage, so stay tuned: I'll post links as the week progresses. And while you're at it, subscribe to the QNX auto blog, which will also discuss what QNX is doing this week at CES.

An (automotive) developer's perspective on HTML5

Which brings me to a new installment in the QNX video series on HTML5. In this video, Sheridan Ethier, who manages the company's automotive development team, discusses integration between HTML5 and native apps. He also explains how HTML5 can simplify development efforts and deliver the performance needed for graphically rich infotainment systems.

Posted by Paul N. Leroux at 8:43 PM No comments: Links to this post