Yeah, I know what you're thinking: He's posted a wallpaper of a fence? Actually, it's one my favorites — a pleasant, symmetrical design that doesn't wear out its welcome.

In any case, here are my three latest PlayBook wallpapers, all posted on Flickr. See below for download instructions.


Posted by Paul N. Leroux at 9:18 PM No comments: Links to this post

As a pilot, how do you learn to handle a critical problem, such as a hydraulic failure in mid-flight, when that problem may occur only once (if ever) in your career? And how do you practice difficult maneuvers until you get them right, without endangering yourself or anyone else? In a flight simulator, of course!

Mechtronix is one of the biggest, and fastest growing, flight simulator vendors in the world. And to get there, they've taken the road (or should I say flight path) less traveled. Rather than equip their simulators with all the hardware deployed on actual planes — the traditional method — they use software to replicate most of an airplane's behavior.

Eliminating hardware offers numerous benefits. It cuts costs dramatically. It makes the simulators lighter and easier to transport. And it makes them easier to maintain, since the customer no longer needs a specialized avionics engineer. But enough from me — let's hear Thomas Allen, VP of Technology at Mechtronix, describe the company's approach and how the QNX OS helps make it possible:

Two things stand out for me. The first is QNX's talent for juggling many concurrent tasks and gazillions of I/O points. This ability to support intense multitasking, while delivering fast and predictable response times, is essential to replicating the experience of flying a real plane.

Posted by Paul N. Leroux at 5:32 PM No comments: Links to this post

This just in: QNX Software Systems has announced that Onstar's aftermarket rearview mirror, dubbed the OnStar FMV, is based on the QNX OS.

The premise of the FMV of simple: Bring the safety and security features of OnStar to non-GM vehicles. These features include automatic crash response, turn-by-turn navigation, hands-free calling, stolen vehicle recovery, and one-touch emergency calling.

The FMV also uses the QNX acoustic processing suite, which filters out noise and echo to improve the quality of hands-free calls. The suite eliminates the lengthy tuning process required by conventional solutions, as well as the need for dedicated acoustic processing hardware. Or as my marketing friends would say, it saves time and money.

If you have time for a video, here's a commercial promoting the FMV's stolen vehicle recovery feature. It's a clever piece of advertising: You never actually see the FMV or the car it helped recover. The focus is strictly on the user and how the FMW saves her day (and, apparently, a pair of shoes):

It's taken me forever, but I've finally started to post full-size versions of my BlackBerry PlayBook wallpapers.

To download the wallpapers from your PlayBook:
Here's what I've posted so far: 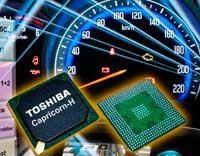 You may not know it, but the QNX OS powers a variety of digital instrument clusters, in vehicles such as the Jaguar XJ and the Land Rover Range Rover. To create these clusters, automotive designers need graphics silicon that can pack a lot of performance, simplify system design, and keep costs down. Not an easy combination.

To address these requirements, Toshiba Electronics Europe has just launched Capricorn-H, a display controller for instrument clusters and other in-car displays.

Equipped with an ARM Cortex-A9 multi-core processor, Capricorn-H is a compact, integrated device that incorporates all of the functions and peripherals needed to control TFT panels and to display high-quality 2D/3D graphics. To reduce costs, the controller features a ‘Magic Square’ algorithm for delivering 24-bit performance from lower-cost 18-bit displays. And to simplify the display of virtual speedometers and tachometers, the controller uses a 2D graphics engine with high-performance rotation, transformation, and scaling functions.

Posted by Paul N. Leroux at 11:57 AM No comments: Links to this post